For those of you who have never heard of the Zapatista movement, here is some background information about how it started and what has been going on.

The Zapatista National Liberation Army: The voice that arms itself to be heard. 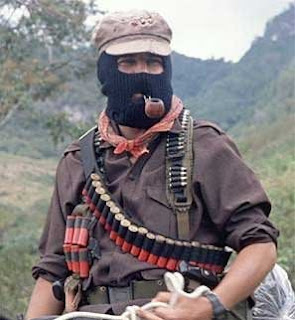 The New York Times has named the Zapatista movement as the first "post-modern revolution". Led by the "suave, pipe-smoking, balaclava-clad Subcomandante Marcos", pictured below. BBC News calls him "the charismatic guerrilla", Marcos is known for his black face mask and his pipe. Marcos made his name in Mexico after the uprising on January 1, 1994, when the Zapatistas came out ane revealed themselves to everyone around.

The Zapatista movement starts in Chiapas (the southern most state in Mexico) and is working to expose to the rest of the country just how impoverished the people there are. But this movement has captured not only the attention of the Mexican community, but also that of the international community. European countries as well as many others have made notes of what is going on there, the New York Times has had articles on it, the latest from December 9, 2008.

This uprising occured when the Zapatista National Liberation Army rose up against the Mexican govemnent, taking up arms and marching for 15 days from their jungle in Chiapas to the heart of Mexico City. Leaving February 24, 2004.

While the Zapatistas did take up arms and weapons for this uprising, they stated "We did not take up arms to gain a political post or office or soem other important place. We rose up in arms because we would not die forgotten. So that people will hear our demands adn not forget that in this corner of Mexico, live meany indigenous who have been abandoned for many years."

As one would guess, Sucomandante Marcos and his Zapatista followers are quite popular throughout Chiapas. The people living in Chiapas support completely what the Zapatistas are trying to do. There are entire stores in the marketplaces that are completely devoted to the Zapatistas and the movement. Marcos is even being compared to and noted as the next Che Guevara. While this may seem strange and unlikely to many people out of Mexico, it is quite obvious when one sees the t-shirts, Marcos dolls and many different posters that are found in Mexican shops.

There are a few videos on YouTube, were Subcomandante Marcos was interviewed. There are 1, 2, 3 parts. In this order